This is a very creative, short video by Steven Johnson, on Where Good Ideas Come From.  My ideation style is classic “slow hunch”.  Whether the results are good or not, is a whole other conversation.

In my quest for change-friendliness, I’m working through a stack of reading on capabilities, business dynamics, business-technology innovation and change.

Like many, I have the bad habit of multi-tasking my reading, so items don’t move to the finished stack as quickly as I’d like.  However, a book that grabbed my full attention is Switch, How to Change Things when Change is Hard, by Chip and Dan Heath.

Switch is not your typical change management tome.  There’s no 10-Step Plan or Come-to-Consensus moment.  Instead, the Heath brothers present a clear 3-part framework based on scientific research of how the human brain works.  In short, the framework advocates appealing to individual’s rational (Rider) and emotional (Elephant) sides, and shaping the change path.

The book is broken into three sections – Direct the Rider, Motivate the Elephant and Shape the Path.  Consistent with their earlier book, Made to Stick, and their Fast Company column, Switch is replete with real-world anecdotes about identifying, motivating and executing difficult changes.

One story that stuck out for me was Jerry Sternin’s work in 1990 with Save the Children in Vietnam.  Save the Children was invited to Vietnam to combat malnutrition.  However, when Sternin arrived, he was given "six months to make a difference".  This deadline made the research Sternin collected on malnutrition root causes — poverty, lack of clean water, poor sanitation and nutrition ignorance — "true but useless" (TBU).

Sternin didn’t have the time or money to address the underlying issues.  He needed to identify a more direct way to make a difference.  Forgoing the typical "focus on the problem" route, Sternin set out in search of bright spots.   Sternin sought out well-nourished village children to learn how they defied the odds.  Once identified, Sternin studied how these homes varied from the norm, on the lookout for deviations related to nutrition.  Through observation, Sternin was able to identify differences in what and how the well-nourished children were fed.

Instead of issuing a proclamation of his findings,  Sternin created a change path.  Sternin instituted a mothers-teaching-mothers community program to change feeding habits.  Making these seemingly small adjustments – number of meals per day, individual servings, sweet potato green and shrimp supplements to rice — dramatically improved childhood nutrition in the studied villages, and then spread throughout the country, eventually reaching 2.2 million people in 265 villages.

Besides the humanitarian aspect, what appealed to me about Sternin’s story was the problem solving technique.  Instead of getting lost in "true but useless" (analysis-paralysis) Sternin identified and exploited bright spots.  In a later example, a similar technique is described as Appreciative Inquiry.

Reading Switch, I picked up techniques related to change and solving hard problems.  The latter was a pleasant surprise for me.  If your work involves change, hard problems or the combination, I highly recommend Switch.

Or, is the business architect more of an assessor? Analyzing the current design to suggest, or apply changes?

Or, is the business architect more of a recorder (archivist)?  Capturing the current, future and transitional design aspects for use in operations, measurement, analysis and change initiatives?

Or, yes one more, is the business architect the "matcher" of business and technology capability?  Discovering new opportunities or solutions to hard problems?

I know, "it depends". Thus, my problem with the term.  The activities described above vary from high-level strategy to information management.  Each is important. But, are they all done by Business Architects?  I’ll skip the "are they all business architecture activities" question for now.

Instead, I’ll return to this post’s title: Business Architect circa 1925.  In his book,  The Prize, The Epic Quest for Oil, Money and Power, Daniel Yergin recounts a 1925 conversation between Calouste Gulberkian and Walter Teagle on royalty compensation.  During the exchange, Gulberkian takes offense at being called an "oil merchant":

"…Surely, Mr. Gulbenkian, you’re too good an oil merchant not to know that the property won’t stand any such rate as that."

"Gulbenkian’s face went red, and he furiously banged the table.  "Young man! Young man!" he shouted. "Don’t you ever call me an oil merchant! I’m not an oil merchant and I’ll have you distinctly understand that!"

"Teagle was taken aback. "Well, Mr. Gulbenkian," he began again, "I apologize if I have offended you. I don’t know what to call you or how to classify you if you aren’t an oil merchant."

If Gulbenkian worked in your organization today, would he — the business designer — be right in his fury? Or, would he be an oil merchant, who is assisted by business architects, who record, analyze and/or help execute his design?

Me, I’m with Gulbenkian. Table pounding and all.

Having lived in New England my entire life, I have no love for the New York sports teams.  However, I can set that bias aside to appreciate the New York Jets use of active information (fresh, analyzed in-context, actionable) to manage game day business operations in their New Meadowlands Stadium.

As a recent article in Fast Company describes, the Jets have implemented “a first-of-its-kind "Command Center," which will help executives and merchandisers track customers in real-time.” 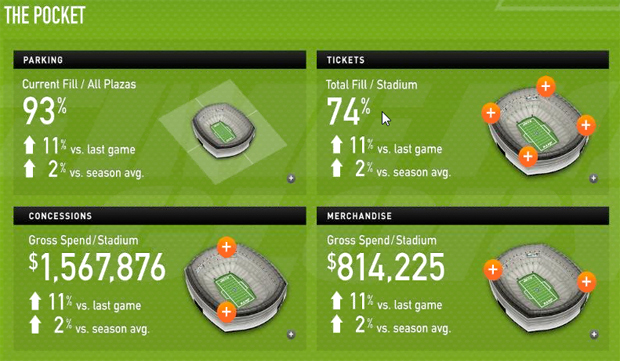 During the game, executives and operations personnel can monitor the flow of sales, people and traffic and make adjustments to maximize profits and game day experience.

“The stadium is heat-mapped too, so if lines are getting to long, mobile vendors can be directed to help ease the burden". You might realize, hey, this part of the stadium has more sun in the fans’ eyes, and is selling more hats," says Geoff Cubitt, chief technology officer of Roundarch. "We’re running out of inventory there, but the other side has plenty. In real-time, you can be smarter about how to allocate."”

“…The Command Center won’t just help managers and executives, but will soon aim to improve the fan experience as well. Cisco has invested $100 million into the stadium, and one rep estimates the company’s technology could provide fans with estimated wait times in the near future. The dashboard will also warn of choke points at stadium gates and concession stands, so fans can be informed of how to avoid the longest line for a burger, or the best way to exit after the game.”

Shortening beer lines, reducing traffic and maximizing profit all in real-time, sounds like a winner to me.

Check out all the Command Center graphics in the Fast Company article.

Moments ago, the BPM / SOA Community of Practice announced the winners of the 2010 case study contest.  The overall winner was Van Ameyde International.

The Van Ameyde Group specializes in international claims and risk management for major international insurance companies, captives and brokers, government agencies, and corporate and industrial clients including the energy sector, the shipping industry, ports and terminals.

The runner-up winner was AmerisourceBergen Corporation, one of the world’s largest pharmaceutical services companies serving the United States, Canada and selected global markets with a focus on the pharmaceutical supply chain. Servicing both pharmaceutical manufacturers and healthcare providers, the Company provides drug distribution and related services designed to reduce costs and improve patient outcomes.

The AmerisourceBergen case describes an enterprise-wide BPM implementation that enables processes such as contracts management and chargeback, AP vendor reconciliation, pro-generics competitive pricing and the quote to contract lifecycle. This year, as part of the company’s broader business transformation initiative, AmerisourceBergen replaced its legacy system with SAP, and used BPM to create six new processes, including PO reconciliation and variance resolution.

To learn more about this year’s contest, visit the contest website.

[Disclosure: The BPM / SOA Community of Practice is a client of my firm, Elemental Links.]